HOW MUCH A COMEDIAN EARNS IN INDIA? 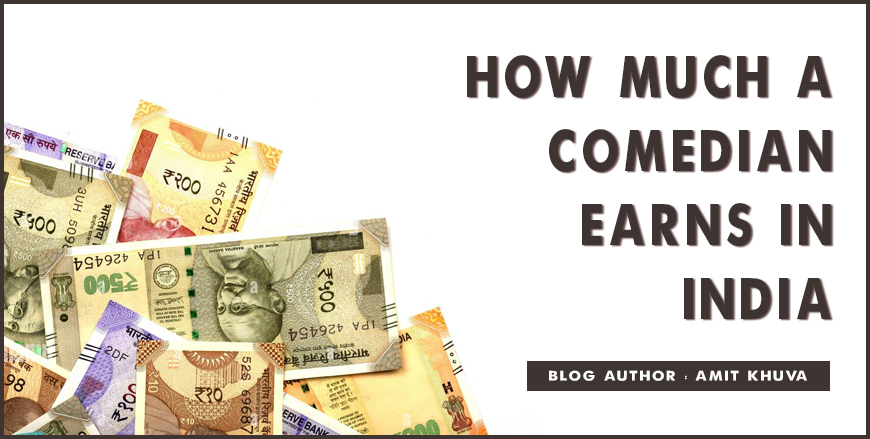 How Much A Comedian Earns In India?

Definitely More than a television actor and certainly less than Amitabh Bachchan.

First things First, Comedy has more money than approximately any other art form, especially in India. As a Comedian with the experience of couple of yours generally charges exactly the same amount as a whole musical group or a theatrical play with the team of 5+ artists with the same amount of experience.

However, comedy does not have money in the initial phase as the other art forms like music, dance, acting, magic etc. An Aspiring Musician, Actor or Dancer might be charging 25% then an experienced one. Nevertheless, It would be difficult for an aspiring comedian to get even 10% of what an experienced one charges.

“Live comedy's a very reckless, foolhardy profession. You're only as good as your last gig so earnings fluctuate.”
- Bill Bailey

The reason behind this is that comedy does not have constant growth rate when it comes to an individual comedian’s career. On growth scale of 1 to 100, It is 0-10 for few months than 15 directly and then 35 directly after few years and then 70 directly after few more years. The growth Jumps from one big career event to other. A Jump does not mean sudden jumps but the jumps after a well spent time in developing the art. However, it does not have constant growth, which is a fact.

So, does comedy have money? YES!
Do comedians earn enough? More Than Enough.
Now the question to you is, are you ready enough to dedicate your few years working the craft considering the growth rate of your comedy career? If yes, Bingo! See you on stage.

Should We Take Comedians Seriously?