SHOULD WE TAKE COMEDIANS SERIOUSLY ? 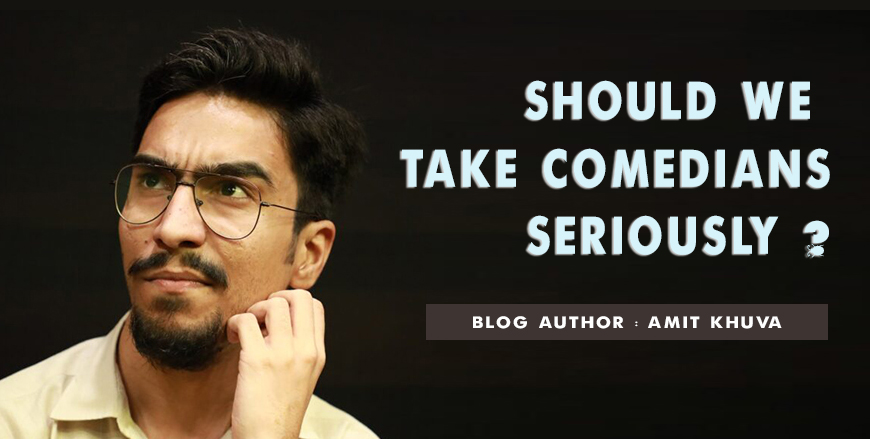 Should We Take Comedians Seriously?

So, It all started with few jokes and some mockery! Comedians role decades ago was to make people laugh, of course it is now the same but now comics understand the art from thoroughly. Now it is not only about making them laugh, it is about making them laugh and making a point too.
But even if comedians were making a point while creating comedy, they weren’t taken seriously as veteran comedian Jaspal ji quoted,

But things had changed in last two-three decades, nowadays comedians are the people who other people look forward to. The opinions of humourists started mattering even in political agendas and big on goings of the country. This happened because of a very simple reason that, Anything can be conveyed with coat of Humor. And what better than politics to take benefit of this? So before comedians themselves started thinking about politics seriously, politicians started admiring comics and started endorsing their skills in use of their political agendas.

In 2018, Author Jennalee Donian have wrote and published a book named ‘Taking Comedy Seriously: Stand-Up's Dissident Potential in Mass Culture (Politics and Comedy: Critical Encounters)’. The book claims to questions the possibility of a contemporary aesthetics of humor, given that much of the art form is disseminated and controlled by the mass media, and as such complicit in its work.

However, It is not only about last few decades, Comedy has impacted on many various fields of life since very long. Humor has always been a powerful tool in conveying, inspiring and sometimes influencing people, As it is widely used by not only politics but also media, advertisements and what not!

One of the major reason of people admiring humourists and also the reason why people should take comedians seriously is that, comics have always been visionary ahead of their time.

i.e. In November 1932 Will Rogers published the following remark in his newspaper column:

“Everything is changing. Now people are taking their comedians seriously and the politicians as a joke, when it used to be vice versa.”

Comedians have always been in spotlight. Not only because of their wittiness and straight forward opinions, but for the impact which they leave on people!

So If we talk about Should comedians be taken seriously? In close-up, No! Laugh on what we say, that’s what we comics are there for. In long-shot, Yes! We are visionary, We have opinions that matters to people and mainly Humor leaves impact, so do humourists, so why not?

How Much a Comedian Earns In India?