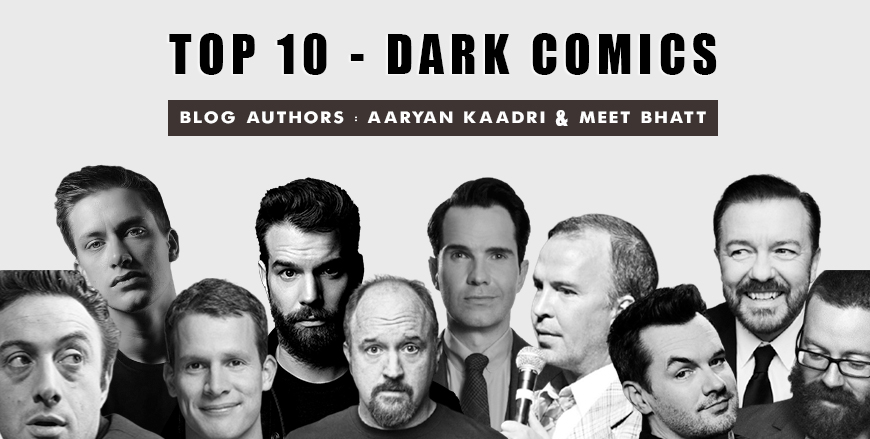 Whenever it comes to jokes that are just on the line between funny and obscenity such that when the comics starts with a premise on a superserious topic a tension is created and heightened such that the comic relief breaks the room with chuckles, the type of joke having such effects are referred to as dark jokes. They are also referred to as black comedy or morbid humour and are some of the most offensively hilarious bits of fun.

Below is a list of some of the world-renowned comics of all time that are especially known for their dark jokes curated by our discretion.

In 2018, Author Jennalee Donian have wrote and published a book named ‘Taking Comedy Seriously: Stand-Up's Dissident Potential in Mass Culture (Politics and Comedy: Critical Encounters)’. The book claims to questions the possibility of a contemporary aesthetics of humor, given that much of the art form is disseminated and controlled by the mass media, and as such complicit in its work.

1) Anthony Jeselnik: Jeselnik is one of those comics who is very effortlessly funny, his jokes take time to process but they delve deep. His trademark deadpan style of performing gradually descends into the audience and take time to process from silence to Hilarity. He loves to offend people and if people get offended he writes jokes on them getting offended too.

2) Ricky Gervais: The rebel of comedy himself, tell him not to joke about something and the next time you'll find him have 3 sets about the same. His dark humour is not just limited to his standup but also his Screenwriting and various movies and sitcoms.

3) Daniel Sloss: His unique voice his unique expressions and whatnot, he is one of those comics that always stand out. His jokes are not like other dark comics, in general, they are always from a perspective probably never thought of, he has a super funny bit on gay penguin sex on YouTube as a great example. God, cancer, Santa, name a topic he hasn't joked about.

4) Frankie Boyle: this comedian is not for those who are easily offended. He is one of the most notorious comedians, and one of the most controversial characters on TV. He has most shocking and outrageous jokes. His cutting comedy is not for the faint-hearted. His Michael Jackson children's hospital joke is the best example to describe his comedy.

4) Frankie Boyle: this comedian is not for those who are easily offended. He is one of the most notorious comedians, and one of the most controversial characters on TV. He has most shocking and outrageous jokes. His cutting comedy is not for the faint-hearted. His Michael Jackson children's hospital joke is the best example to describe his comedy.

5) Jimmy Carr: His oneliners have extreme misdirection and the most unexpected level of intense humour is witnessed in his jokes, incest, paedophilia, you name it, he has jokes on it. He is one of the few comics who encourages people to heckle, is crowdwork is taht famous that many people come to his shows just to get taken down as a heckler. He has been into comedy since a while and has hosted several weird concept talkshows and is pretty known of a face when it comes to celebs.

6) Jim Jeffries: Unlike most dark comics, he is one of those comics who paints a picture of teh scene with his character voices and act-outs, such we can imagine the most absurd scenes taht he describes. He is a great storyteller and comes with a sofa and a table on stage as if he is narrating something to his friends at a party and shares his anecdotes of his adventurous lives, he likes to bring teh other perspective into standup such that we are not polarized with only politically correct opinions, for eg. We should be empathetic towards the disabled but there are some disableed people who are mean and use and use their diability as a defence when other people are in mean in return to them. He loves to delve into such mentioned exceptions and sisect very such permutation and combinations of every wild possibility.

7) Louis CK: Probably one of the greatest of all time comedian, he had to make it to the list. Though he has been part of several controversies still irrespective of you like CK as a person or not, most are lovers of his comedy. He simplifies complex concepts like religion, sex into such an layman way that his audience widens, not being one of teh few typical smart joke comics who only pander to the ‘smart’ audience. It feels as if he has figured out the formula to comedy when one sees him killing everytime he says anything on the stage.

8) Daniel Tosh: He is one of the most underrated dark comedians. He is known for his deliberately offensive and controversial jokes. The best example would be the eggplant bit which is available on YouTube.

9) Doug Stanhope: he is a kind of guy that can have your sides hurting from laughing with the darkest shit imaginable, that's an amazing gift.
his bit about his mother's suicide for example is comedy gold.

10) Lenny Bruce: He was in the very first generation of standup comedy. He was the first comedian who started to talk about controversy, we can say that without his efforts in standup comedy we would not be able to get some of the great comics like Bill Burr, Louis CK, Joe Rogan etc.

How Much a Comedian Earns In India?